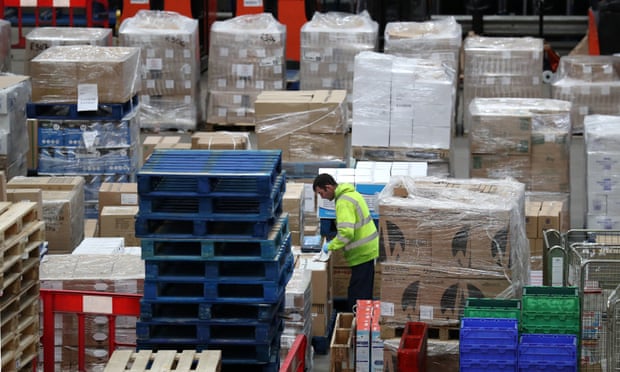 UK government stockpiles containing protective equipment for healthcare workers in the event of a pandemic fell in value by almost 40% over the past six years, the Guardian has found.

Analysis of official financial data suggests £325m was wiped off the value of the Department of Health and Social Care (DHSC) emergency stockpile, reducing it from £831m in 2013 under the Conservative-led coalition government to £506m by March last year.

The finding is likely to raise further questions for the health secretary, Matt Hancock, who faced criticism over the weekend after urging healthcare workers not to “overuse” personal protective equipment (PPE).

The revelation raises questions about why the value depreciated so quickly and how the fall related to stock-levels.

According to official figures at least 19 UK healthcare workers had died after contracting coronavirus. Frontline medical staff have complained of PPE shortages, which they say are putting lives at risk.

Last week, it emerged that three nurses who had been wearing bin bags due to a lack of PPE had tested positive for coronavirus. It was also confirmed that a consultant at a hospital in east London died from the virus weeks after making a plea to the prime minister for more PPE for NHS staff.

Hospitals have turned to schools for donations of science goggles amid shortages of eye protection, while some NHS staff have made improvised masks out of snorkels and bought kit from hardware stores.

The widespread shortages of equipment, which Hancock has blamed on problems with the distribution system, has raised questions about the UK’s levels of preparedness for a pandemic of this kind.

Accounts suggest funding for “stockpiled goods” that are “held for use in national emergencies” was increased between 2008 and 2011, when pandemic preparedness was identified as a national priority for the NHS. But since 2013 the value of the stockpile has fallen.

The findings are likely to renew questions about whether government stockpiles held sufficient quantities of personal protective equipment (PPE) before the Covid-19 pandemic and whether emergency preparations were affected by almost a decade of cuts and reduced public investment.

On Sunday, it was revealed that one in three UK surgeons say they do not have access to enough masks, gowns and other clothing to keep them safe.

Contacted by the Guardian, DHSC declined to provide a breakdown of its emergency stockpile’s contents, which will also include medicines such as antivirals and flu vaccines. However, NHS plans drawn up in 2017 state that “the bulk of” the pandemic stockpiles available to the health service consisted of PPE, including FFP3 respirator masks, gloves and aprons.

The stockpiled goods have shelf lives and so require frequent replenishment. According to the DHSC’s financial accounts, between 2011 and 2019 depletions of the emergency stockpile significantly outstripped the amount spent on adding new supplies to the reserves.

A spokesman for DHSC said the value of the emergency stockpile “does not relate to the volume of its contents”, adding that “through responsible procurement” officials had been “successful in maintaining its stock”.

The department refused to answer the Guardian’s questions about the volume of the stockpile in 2019 compared with 2011.

The spokesman said the UK was “one of the most prepared countries in the world for pandemics” and the government “continues to work around the clock to give the NHS and the wider social care sector the equipment and support they need”.

The reduction in the stockpile’s value occurred at a time the government considered that a pandemic represented the most serious emergency threat likely to face the UK. The government has in recent years been concerned about the rapid worldwide spread of a novel virus to which people have no immunity.

Since 2007, a series of studies and exercises to prepare the UK for an event of this kind identified the availability of PPE for health and social care workers as a cornerstone to a national response, essential to reducing transmission of a new virus.

Dr Lindsey Davies, a former national director of pandemic influenza preparedness, told the Guardian that PPE shortages were modelled as far back as 2007, during a large cross-government pandemic simulation codenamed Exercise Winter Willow. “It was a live issue at the time,” she said.

Davies explained that following the 2007 exercise “there was an increased momentum after that to develop a business case for stockpiling, and a lot of discussion about the right amounts and how far it was right to have a nationally funded stockpile”.

In the wake of the Winter Willow exercise, and with the emergence of the swine flu pandemic two years later, the Department of Health, as it was then known, embarked on a procurement programme aimed at boosting stockpiles of medicines and PPE, according to departmental accounts and performance reports. By the end of the 2010-11 financial year, the value of the department’s stockpile stood at £830m, an 80% increase from 2008-09.

In 2016, after years of delays, the government staged another nationwide pandemic drill, codenamed Exercise Cygnus. The exercise, which simulated a deadly outbreak of so-called “swan flu”, is believed to have shown that in the event of a deadly pandemic the NHS would be overwhelmed by a shortage of critical care beds and vital equipment.

The government is refusing to release the official conclusions from Exercise Cygnus, which have never been made public, but there are indications in reports by local authorities who participated in the exercise that PPE supplies were an area of concern.

It is not clear whether at a national level the conclusions included recommendations about emergency stockpile funding. But DHSC accounts show that in the three years after the 2016 drill, the value of the stockpile fell by more than £200m.

Sir Ian Boyd, the chief scientific adviser to Defra between 2012 and 2019 , told the Guardian it was difficult to get ministers to spend money on preparing for high-impact, low-frequency events like pandemics. “Governments over the years have buried their heads, and it is harder to have those conversations with people who have a small-government view of the world,” he said.

This year, as the government began to consider the threat posed by the novel coronavirus outbreak in China to the UK, PPE soon found its way on to the agenda of meetings between officials and high-level scientific and clinical advisers.

Minutes of meetings suggest that as early as January the government was involved in discussions with advisers about when emergency PPE stockpiles would need to be released.

During a meeting on 28 January of the government’s new and emerging respiratory virus threats group (Nervtag), attended by senior officials including England’s chief medical officer, Chris Whitty, it was noted that if sustained community transmission of the novel virus in the UK was established, the numbers of infected patients in hospitals would rise. “This would entail deployment and use of the UK’s pandemic influenza PPE stockpiles,” a minute of the meeting states.

According to minutes from early February, Nervtag went on to make a series of recommendations to the government’s emergency committee Cobra about what PPE would be required for different settings and different groups of workers. A month later, in early March, advisers discussed a potential scenario where stocks of respirator masks ran out.